When you have another person taking care of your child, the last thing you want is a gut feeling telling you that something’s off. But that’s exactly what Reddit user CeleryKey9938 had to experience.

Recently, she started having doubts about one of the workers at her daughter’s daycare center, so she began to pay more attention to the way the woman treated her kid. Almost immediately the mom noticed a huge level of familiarity, one she simply couldn’t accept. So she went to the director.

The worker had to say goodbye not only to Celery Key’s daughter, but to her job as well. Which is why some of her acquaintances told the woman she could’ve handled the situation in a calmer manner. Not sure what to make of her actions, the mom made a post on the ‘Am I the [Jerk]?‘ subreddit, asking its members to share their thoughts on the confclit. Here’s what she wrote.

This mom was so appalled by the length to which a daycare worker interacted with her daughter, she went to speak to the director 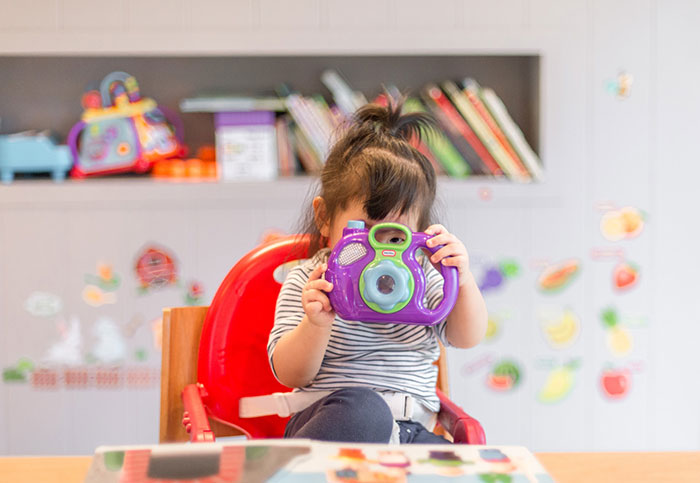 But the familiarity continued, and she said the worker appeared to be “obsessed” with her baby 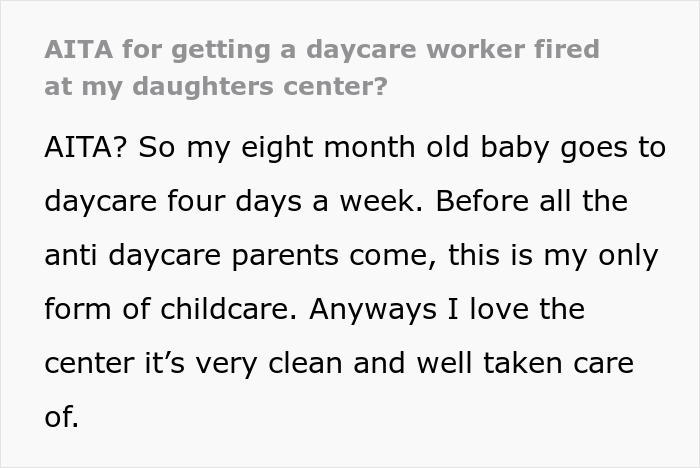 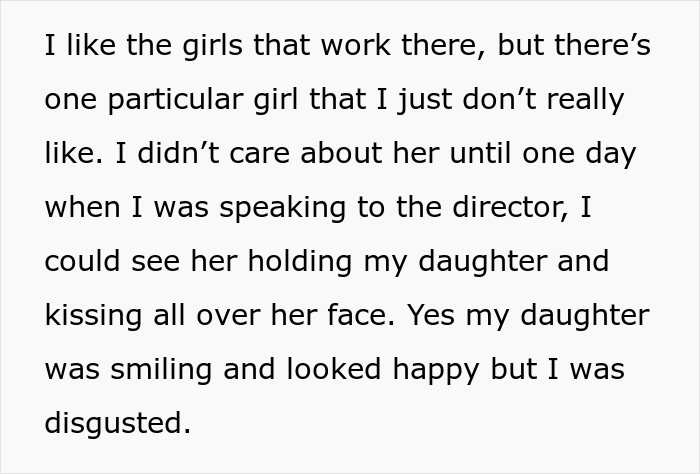 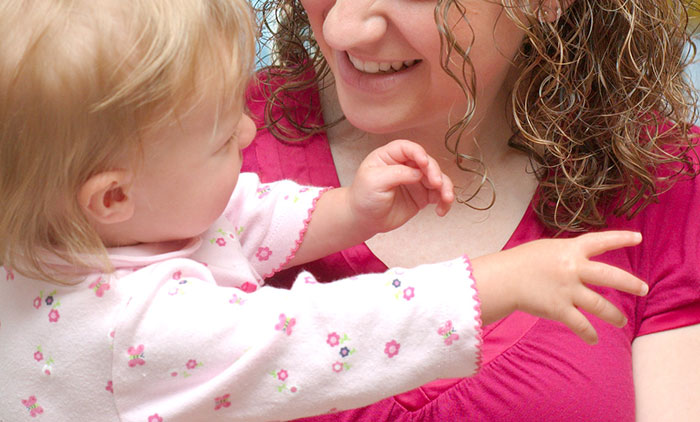 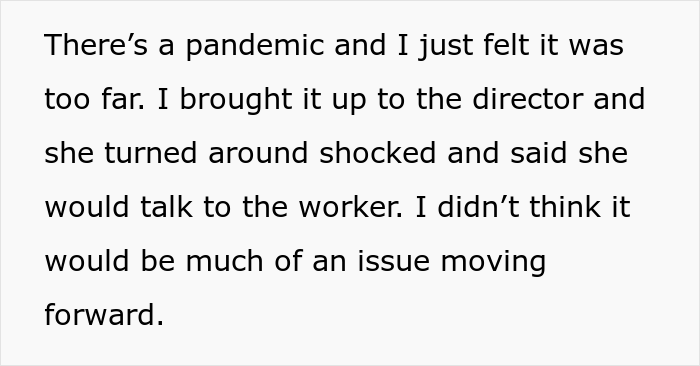 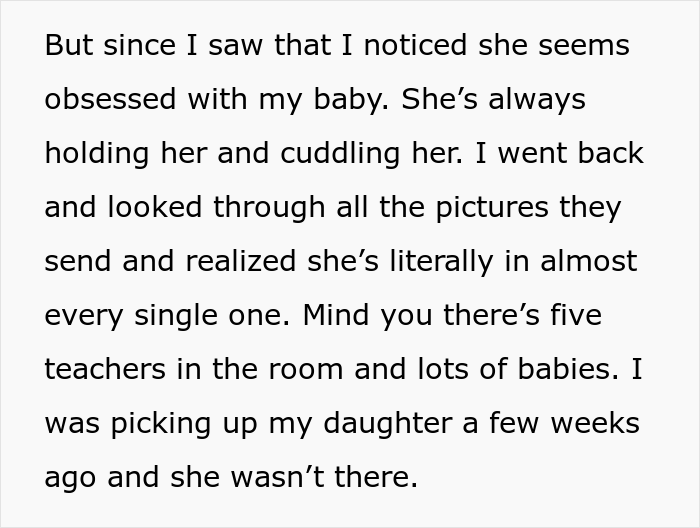 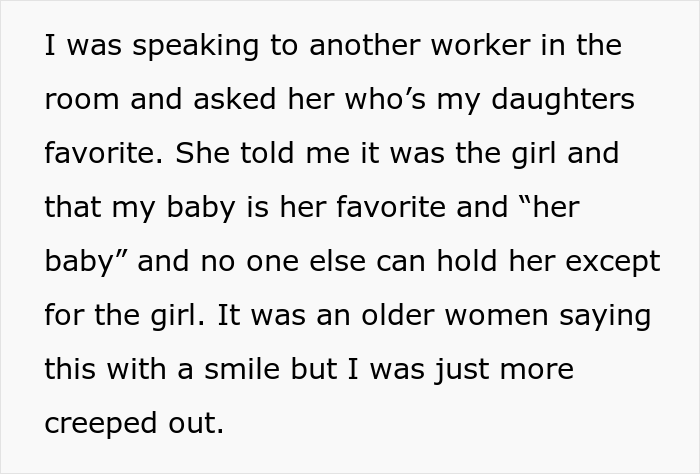 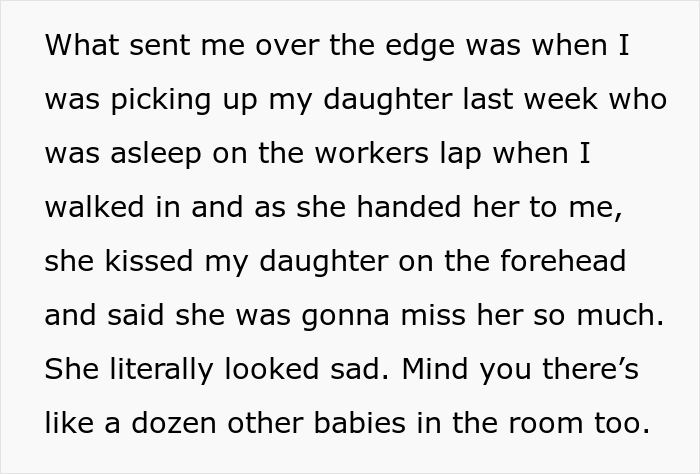 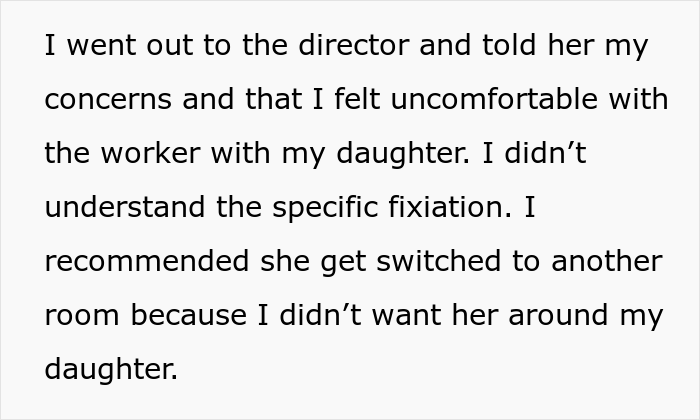 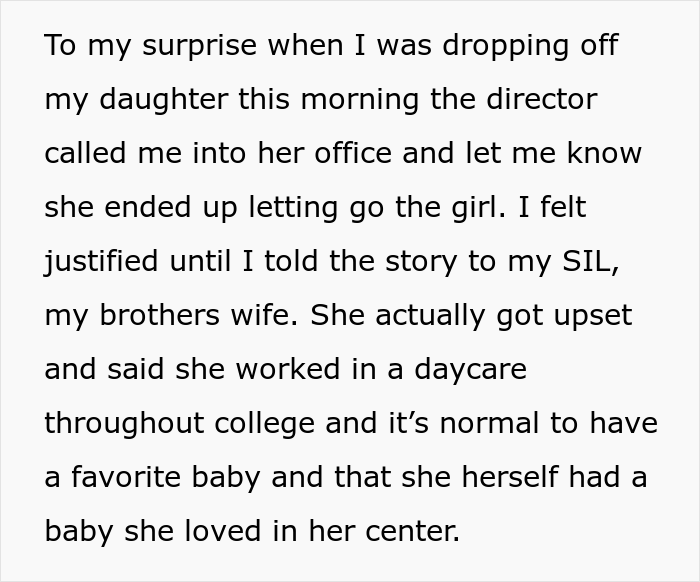 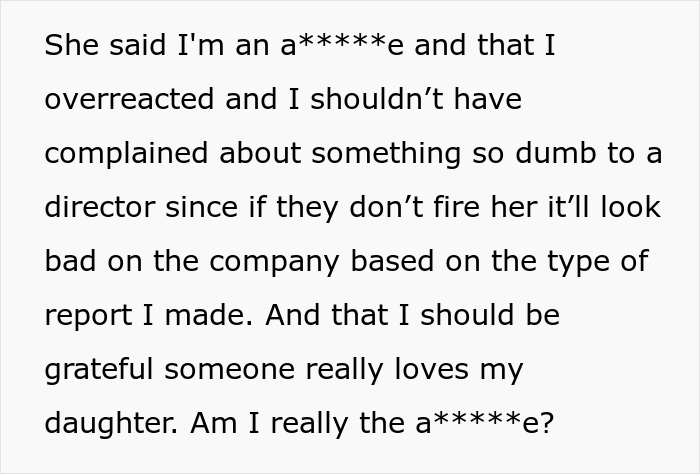 To highlight her point, the author of the post made an additional comment, highlighting that what made things weird was the fact that her child was the only one who received a lot of extra attention.

“My daughter is an awesome baby but [there are] at least twenty or so in the room. I don’t understand why it’s my daughter that she is specifically obsessed with,” she explained. “That’s what made me uncomfortable.”

Regardless of how you feel about this particular case, the reality is that plenty of parents aren’t entirely happy with their children’s daycare, and our hectic lifestyles are often what put us in awkward spots.

In an earlier Bored Panda interview, former editor-in-chief and the woman behind the blogs Motherhood: The Real Deal and 40 Now WhatTalya Stone, said that she has questioned the things that went on in her daughter’s daycare as well but since parents rely on these services in order to be able to continue their careers, managing the juggle between raising a family and earning a living can be quite difficult.

“Even though we may feel the conditions are far from ideal or up to our standards, quite frankly for most parents at least, not sending their children is just not an option,” she said.

What’s worse, the average price to send one child to a childcare center in 2021 rose 5% to $226 per week, up from $215 in 2019, before the pandemic, according to an annual survey by Care.com, an online platform for finding family care.

Washington DC was the most expensive area for childcare or a nanny — on average, it cost $419 per week to send your kid to a childcare center, and $855 to get them a nanny — that’s 85% and 23% respectively above the national average.

“When it comes to childcare, there are three critical criteria — cost, quality and availability — and based on our research findings, we’ve not only failed to make progress as a country, we’ve actually gone backwards,” Natalie Mayslich, president of the consumer side of Care.com, said.

The increase in childcare costs between 2019 and 2020 even surpassed the annual rate of inflation. At the same time, almost half of parents said it was harder to find childcare services. Which makes sense when you consider that almost 16,000 childcare providers shut down between December 2019 and March 2021.

If parents had more choices or could afford other means of child care arrangements, maybe they could find places that would better fit their (and their kid’s) needs and we’d have less stories like this to begin with?